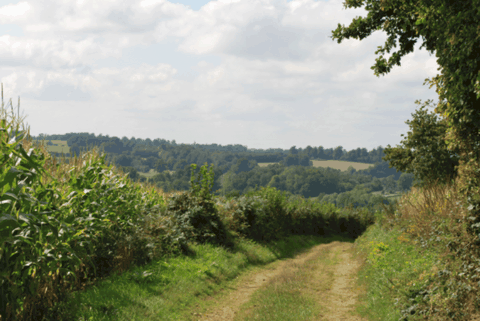 The landscape around Saint Georges d’Annebecq is a hilly bocage.

The bocage has shaped the Norman scenery since the Middle Ages.

Meadows and cultivated fields were surrounded by hedges which protected cultures and animals and provided firewood.

From 1950 onwards, the expansion of ploughing and the development of cattle breeding led to the extension of fields and the cutting of hedges.

This commune was called Asnebec in the 12th century.

For centuries, Asnebec then Annebecq was an important barony equipped with a fortified castle which made up the line of de-fence between Normandy and Maine.

The first lord of Saint Georges we know was Roger de Beaumont, a distinguished counsellor of William the Conqueror.

There are few things left from the rich past of Saint Georges which was not situated in the present village but in the hamlet of Annebecq.

You can see the site of the eroded feudal mound and Manoir de Frotté.

A lot of local place names recall the importance of the place in the past (« High street », « Mill street », « Lazaretto stream »...)

The Rouvre which flows under this bridge is 45 kilometres long.

It has its source in Beauvain and runs across the commune.

The first village of Annebecq developped at the confluence of the Rouvre and the Rouvreau in the Middle Ages.

After running across the Pays du Houlme, the Rouvre flows to Suisse Normande and into river Orne.

Near Saint Léonard mere, much appreciated by anglers, there used to be a chapel and there is still a water mill.